Overall, Oakville’s built neighbourhood fabric can be characterized one of three (3) ways: maturing, established, and new growth. South of the QEW (CEO1) is comprised of the oldest maturing neighbourhoods; North of the QEW and South of Upper Middle Road are also maturing but newer neighbourhoods seeing mostly infill growth and low enrolment yields. North of Upper Middle Road and South of Dundas Street are established neighbourhoods with sustained and continued development and enrolment growth. And lastly, the geography north of Dundas Street (CEO6) is new Greenfield development, characterized by high development growth and potentially high enrolment yields.

As it relates to future development potential, Oakville still has a very generous supply of greenfield developments (low to medium density development subdivisions – Single Family Dwelling and Townhomes) identified as the North Oakville Secondary Plan (East and West) north of Dundas Street (CEO6) to meet its growth targets. A significant number of subdivision applications within the secondary plan have already come online and are under construction. These developments are currently serviced by the newly opened St. Gregory the Great CES (CEO6). The latter opened in September 2016 to accommodate future enrolment growth north of Dundas as the four (4) elementary school sites designated in North Oakville are established.

In addition, there are also two (2) new growth areas located between Upper Middle Road and the QEW, which are the former Saw-Whet (CEO2) and Glen Abbey (CEO3) golf courses being converted into residential developments.

As demonstrated in the below figure, the total enrolment for the Town of Oakville for both the elementary and secondary school panels are projected to be stable as growth generates new students that counteract declines in other areas. There are a number of existing communities that are experiencing overall declines as JK cohort sizes and birth rates decline. Overall, enrolment growth in the North Oakville Secondary Plan area is projected to balance declining enrolment in other areas of Oakville. Also note that the closure and consolidation of two (2) schools improved overall utilization.

Projects Near Me Interactive Map 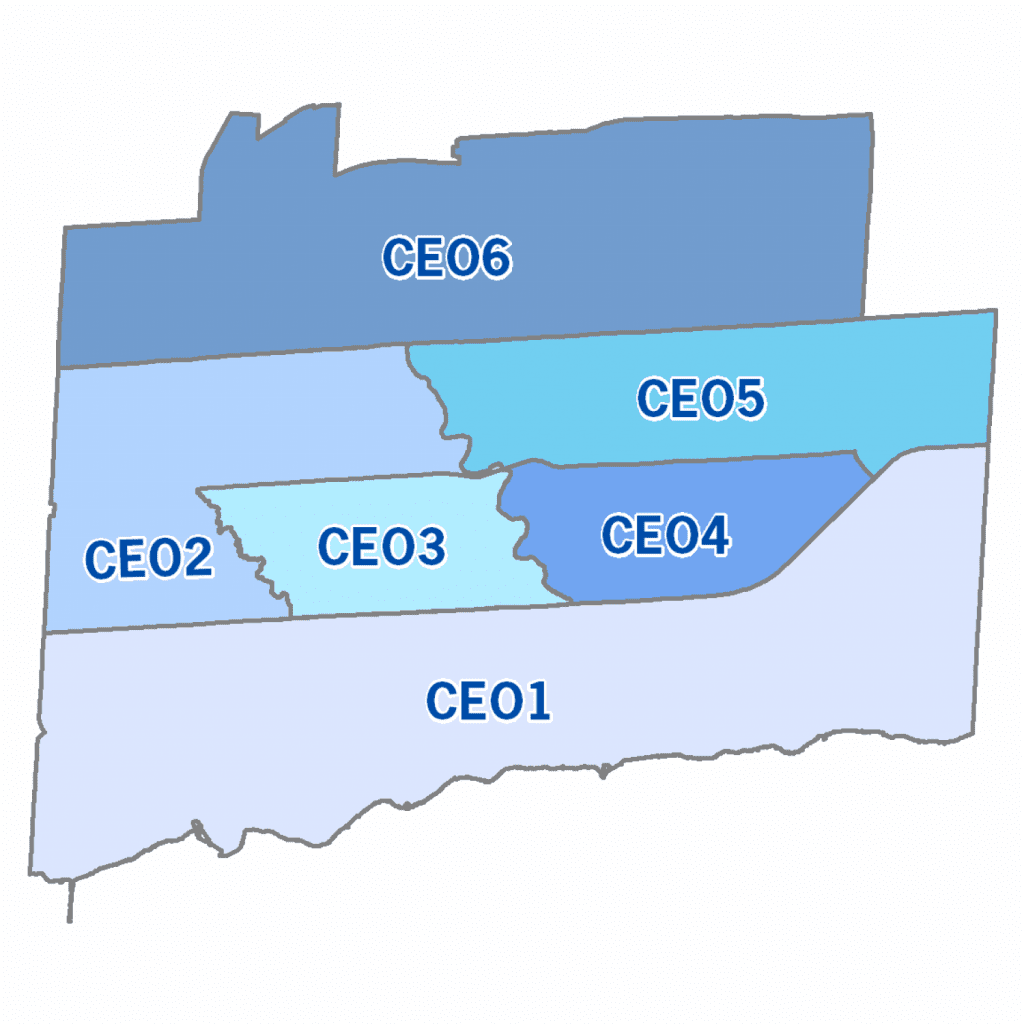 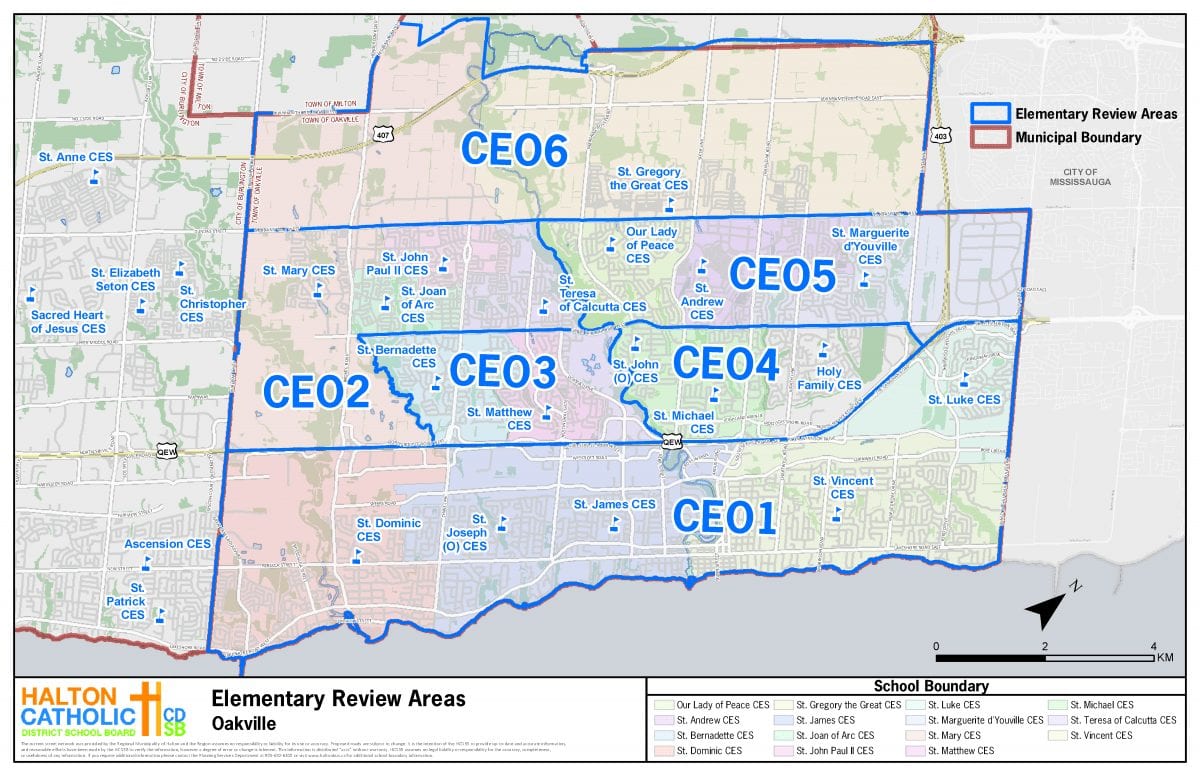 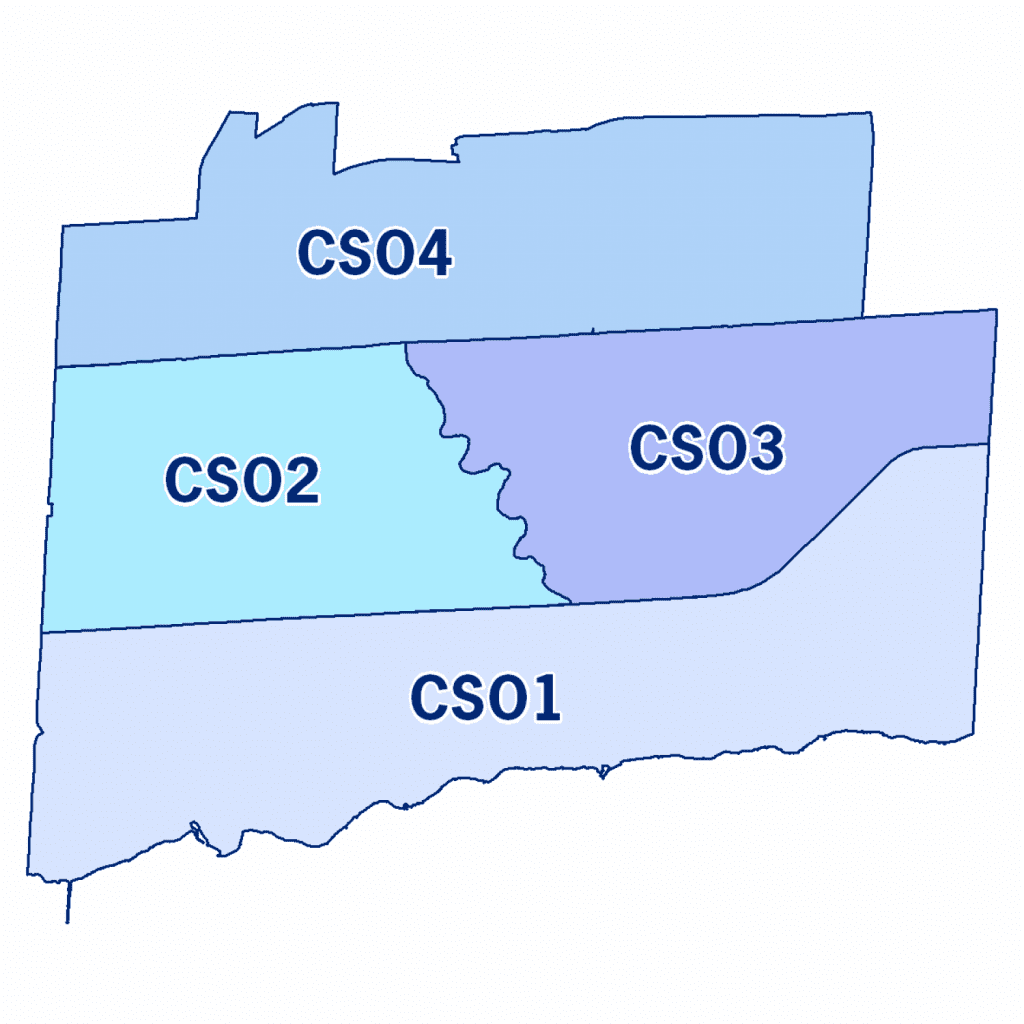 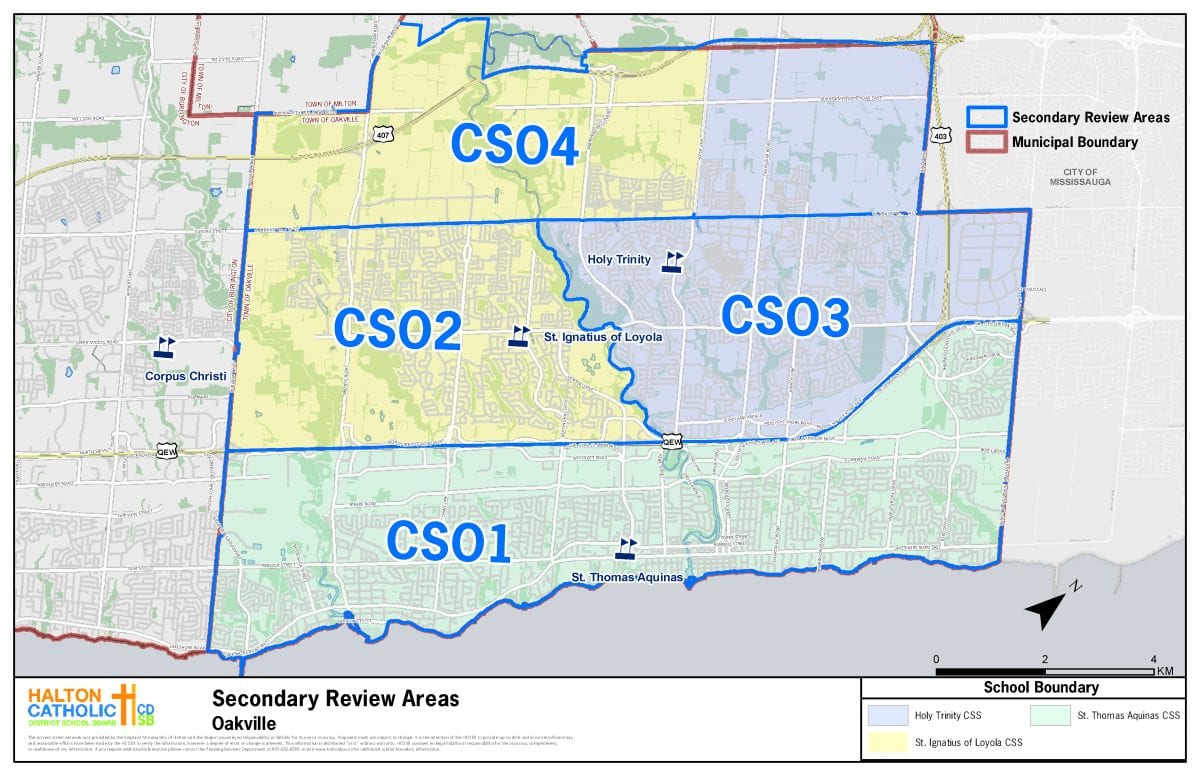 Through a Modified Pupil Accommodation Review (MPAR) undertaken in 2015-16 and subsequent approval from the Ministry of Education for the construction of St. Nicholas CES on the site of former St. Joseph (O) CES, the new St. Nicholas CES facility is scheduled to open in 2019-20.

Neighbourhoods are continuing to age and mature within this area. Future development will take the form of existing single-family home replacements and redevelopment of commercial and institutional sites for residential uses. Medium and high-density intensification is proposed within the Bronte Village, Kerr Street, Downtown Oakville and Midtown Oakville Growth Areas. 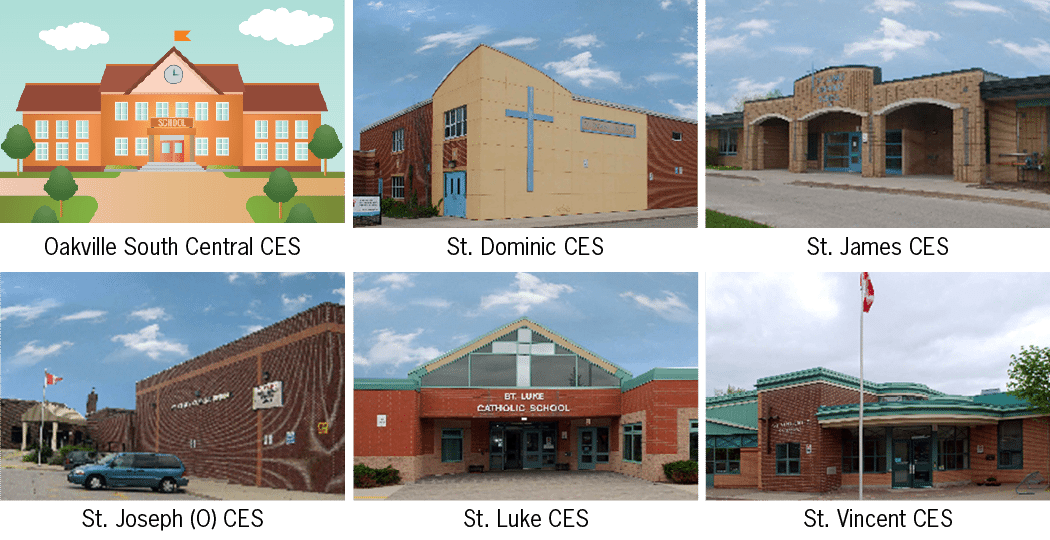 Enrolment has declined in this review area over the last few years and is forecasted to continue declining gradually over the long-term as communities age and mature. 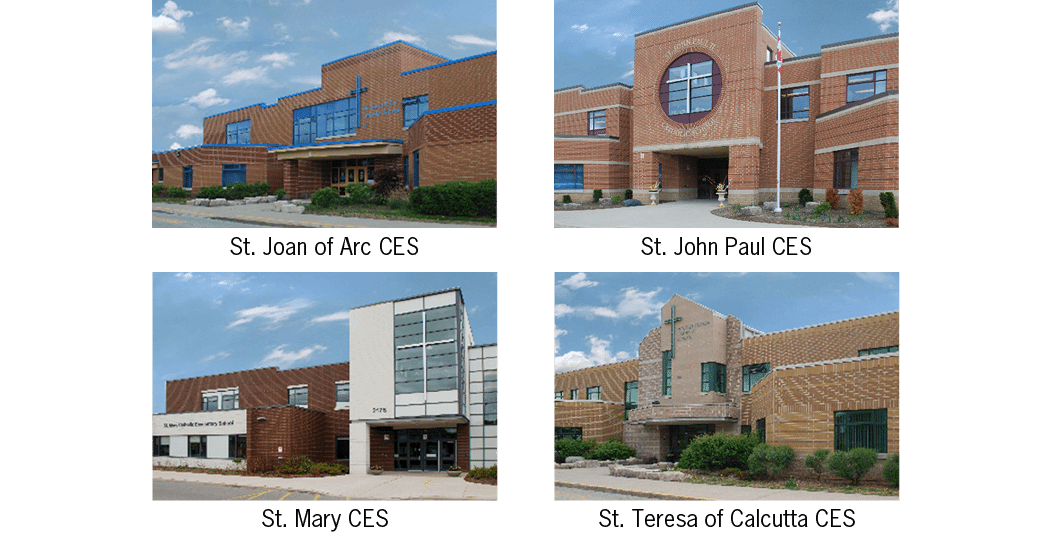 Enrolment has increased over the last five (5) years. It is forecasted to stabilize over the long-term.

Both schools in this review area currently host regional Extended French programs serving CEO2, CEO3, and most of CEO4 and CEO5, which support declining enrolment in the Regular Track programs.

Accommodation pressures at St. Matthew CES are expected to be addressed through Extended French Immersion programming changes starting in 2019. Additional details regarding program changes are available in CEO3 Overview and Projection Details.

The Glen Abbey Golf Course is the last major area with development potential within this review area.

Enrolment has declined over the last five (5) years and is expected to continue decreasing over the long term as neighbourhoods continue to age. To address declining enrolment and high renewal needs, a Pupil Accommodation Review was undertaken in 2016-17.

In early 2018, the Board received funding for an addition to St. Michael CES following its consolidation with St. John (O) CES, which is scheduled to open 2019-20.

Development potential is limited within this area and will take the form of infill development and a few high-density developments along Trafalgar Road. 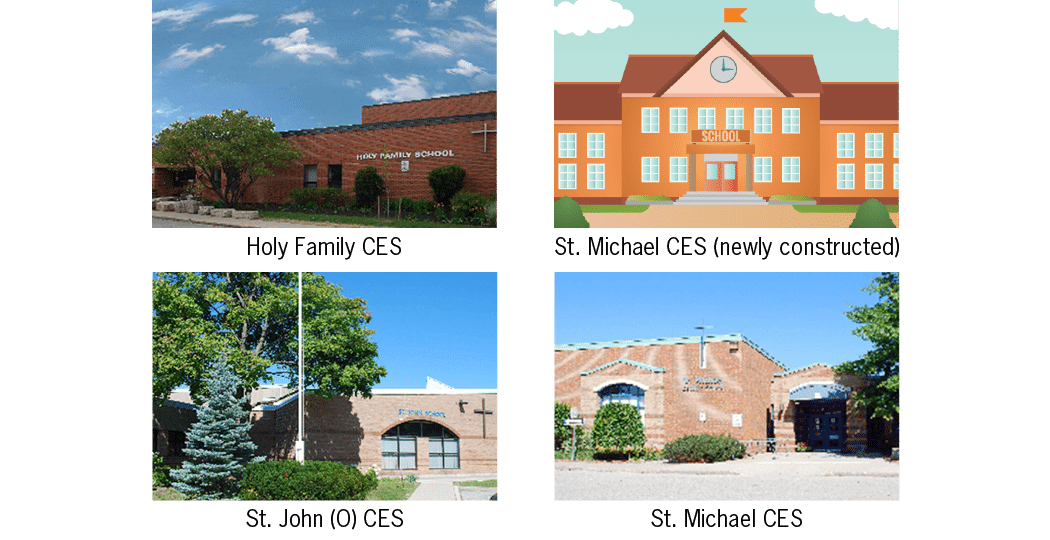 Overall, enrolment has declined in this review area over the past five years and is expected to continue declining over the long-term. To address declining enrolment and high renewal needs, a Pupil Accommodation Review was undertaken in 2016-17. On February 20, 2018, the Board of Trustees rescinded the motion for the consolidation of Holy Family CES (CEO4) and St. Marguerite D’Youville CES.

Development potential exists in the Uptown Core Growth Area (South of Dundas Street at Trafalgar Road) for the long-term. These developments will impact St. Andrew CES.

The first school within this review area was opened in 2016. Since then, enrolment has increased gradually at the school.

Enrolment is projected to increase significantly over time as development continues in the North Oakville. The Board has identified the need for a total of five (5) Catholic Elementary Schools within the North Oakville East Secondary Plan. As such, St. Gregory the Great CES will be the holding school until a second Catholic elementary school is introduced in the area. St. Gregory the Great CES is projected to exceed OTG capacity by 2023.

Enrolment has increased at St. Thomas Aquinas CSS for the last few years and forecasted to be stable over the long-term.

The availability of the International Baccalaureate (IB) program continues to attract students to the school.

Neighbourhoods are continuing to age and mature within this area. Future development will take the form of existing single-family home replacements and redevelopment of commercial sites for residential uses. Medium and high-density intensification is proposed within the Bronte Village, Kerr Street, Downtown Oakville and Midtown Oakville Growth Areas.

Enrolment has increased at St. Ignatius of Loyola CSS for the last five (5) years and forecasted to be stable over the long-term.

The school hosts the largest number of students from the International Student Program (ISP).

Enrolment has been stable at Holy Trinity CSS for the last five years; and is forecasted to increase then stabilize just over OTG capacity over the long-term.

The availability of the new Advanced Placement (AP) program is expected to attract students to the school. The school also hosts regional Extended French programming.

Greenfield development potential exists around the Uptown Core at Trafalgar Road and Dundas Street. There developments are expected to be high-density in nature. The school includes students from new residential developments in North Oakville (west of Sixth Line).

There are currently no secondary schools within this review area. Students from this area attend St. Ignatius of Loyola CSS (West of Sixth Line) and Holy Trinity CSS (East of Sixth Line).

Greenfield development will continue to occur within this area over the long-term and is forecasted to impact enrolment in the community.